Box Office Boss
Home BOB 10 Whether it’s about ghosts, the afterlife, or even ghosting, we’ve got you! 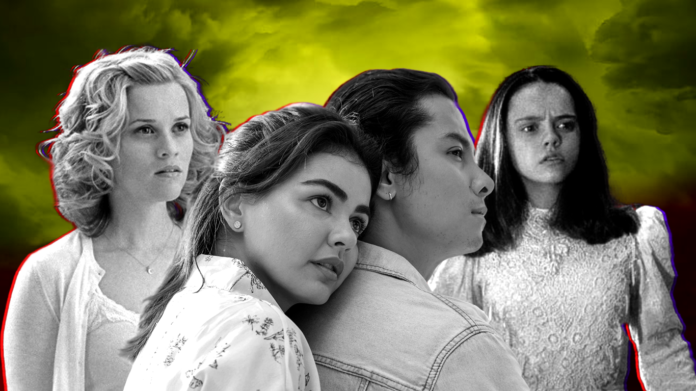 August couldn’t come any quicker. Since it’s also “ghost month”, we’ve compiled a fun list of ghost-related movies for that binge watch you need after a long day or hussle and bussle week. Name it! Ghosts, the afterlife, to ghosting, we’ve got you! Take your pick from ourBOB 10 August opening list.

The O.G. of all puppy-love, kid-friendly, ghost-related films! After a turn of events and Casper’s intervention, James and his daughter (Kat) find themselves in Whipstaff. Then begins the start of the adventure as well as a beautiful friendship between Casper and Kat…and who knows? Maybe more.

Let’s move on to another 90s classic and one of the movies that put Demi Moore on the map! When banker Sam Wheat (Patrick Swayze) is murdered, he works with Oda Mae Brown (Whoopie Goldberg), a psychic, to save his girlfriend (Demi Moore) from his murderer. This funny, romantic fantasy deserves a place on your list. Go watch it!

Apart from playing Marvel’s Iron Man and Warner Bros’ Sherlock Holmes, Robert Downey also starred in several heart-warming movies,  including one from the earlier part of his career, Heart and Souls.

Businessman (Robert Downey Jr.) freaks out when his childhood imaginary friends come back, asking for his help so their spirits can move on. Thus, begins their journey together. This role won Robert Downey, Jr. the Saturn Award for Best Actor.

In this modern retelling of the classic tale of Ebenezer Scrooge, we see Bill Murray as Frank Cross, a cynical and selfish television executive. Similar to the original tale, he is visited by ghosts on Christmas Eve, but with a comedic twist!

Here is another retelling to the tale of Scrooge, but this time set in the early 00s. We see Matthew McConaughey as Connor ‘Dutch’ Mead, photographer and womanizer. His true love is Jenny Perotti, (played by Jennifer Garner). Will the ghost of girlfriend’s past be able to make him realize this?

When a young medical resident, Elizabeth Masterson (Reese Witherspoon), gets into an accident, her whole world turns upside down. She’s now in a coma with her spirit being able to roam about. The only one who can see her? David Abbott (Mark Ruffalo). Will he be able to help her figure out how to wake up from her coma?

He  is usually known for his action films like Die Hard, but in this film’s case…things get creepier. The movie stars Bruce Willis as a child psychologist whose patient (Haley Joel Osment) claims he can see and talk to the dead.

Young and passionate Miguel dreams of being a musician despite his family’s ban spanning multiple generations. Somehow, in his quest to prove his talent finds himself in the Land of the Dead, where he is given a way to unlock the real history of his family.

While it is good to follow your passion, it shouldn’t consume  your life. Joe, a middle-school band teacher, hates his life. His true passion is jazz music. Despite having the talent for it, he always seems to be one step behind success. On the night that could have changed his career path, he  dies, leading him to discover what it really means to have a soul.

Ghosts, spirits, and yes, ghosting. This romantic movie set in the pandemic tells the story of JC Santos (Caloy) and Janine Guiterrez (Len) who meet  by chance online. Despite meeting during community quarantine, they connect, but will their connection last beyond quarantine?

Which one is your pick among in the list? Enjoy watching your chosen films! After all, who doesn’t love a good watch? Time flies, and before you know it, we’ll be posting our picks for September. Stay tuned to catch some of the latest news and interesting features in the world of entertainment.

Do you think we missed out your favorite ghost, the afterlife, or even ghosting films? Share your recommendation in the comment section below!