(A version of this review was first published in The FilmCritters)

Contrary to what most people think, Ruben Fleischer’s “Venom” doesn’t entirely suck. In fact, it’s one of the more entertaining Marvel films of late.

It’s not the best, though.

This is where it gets really interesting. I am even unsure of what to feel about the movie because there are some technical aspects that would raise a few questions, like how was it possible for Eddie to break a glass door of an expensive, high-security research laboratory with only a fire extinguisher.

“Venom” as an origin story is solid enough. Writers Scott Rosenberg, Jeff Pinkner, and Kelly Marcel were able to give us a solid plot that covered the right elements:

It had a ‘hero’ whose struggles are compelling enough to push the plot forward. Eddie (Hardy) was given a second chance in his career but his moral compass combined with his arrogance (his flaws) cost him to lose everything he has.

Desperate to have his life back and to maintain his sanity, Eddie was thrust into a ‘life changing event’ that would jolt him out of his current state. The symbiote infection completely changed his life in an instant and he now has to figure out how he can (1) maintain control of his body and (2) regain his life back.

He’s going to have to face a very tough journey ahead especially since his ‘ally’ and ‘opponent’ are one: Venom.

Clearly his very existence is threatened by his opponent because Venom assumes control of his body and causes him to do things he wouldn’t on his own.

Then, somewhere along the way, his very opponent becomes his ally. This is actually one of the things that might cause you to ask some questions. How did Eddie suddenly became okay with Venom inside him and treat him as if they’re best friends? Well, you’ve got to watch it to know.

Unwittingly, he jeopardizes his situation when he decided to help out a call for help. But in reality, he was motivated by personal reasons: some sort of revenge. And that gets the ball rolling. 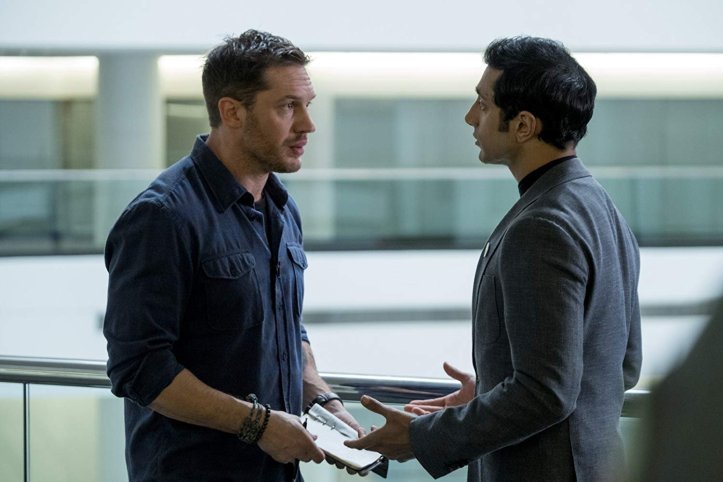 What makes “Venom” entertaining and worth your time? Well, for one, it has the signature Marvel comic flair. I really appreciate how it doesn’t try to make viewers laugh but then, in specific moments, the audience would burst out in laughter. That says a lot about its writing.

Another thing is Hardy. I couldn’t picture any other actor playing the role. He gave a really good performance, which was highlighted during the times when he is struggling to take control of his body. He acts better than Evans, Bosewick, and even Renner combined.

And let’s not forget the youthful Michelle Williams who plays Eddie’s girlfriend, Annie. She has her moments in the movie and it was refreshing to see her in this kind of role.

Yes, there were misses, like the not-so-impressive CGI. The movie could have also benefited from more action scenes. However, that motorcycle chase was a good one. The final battle, I’ll leave it up to you guys to decide.

Ultimately, “Venom” is a fun watch. It’s not a top tier Marvel movie, but it certainly is not a horrible flick like some people paint it to be.

In fact, if you look at it closely, it’s a formidable movie because it covers all the necessary elements that make a good, formula Hollywood script.