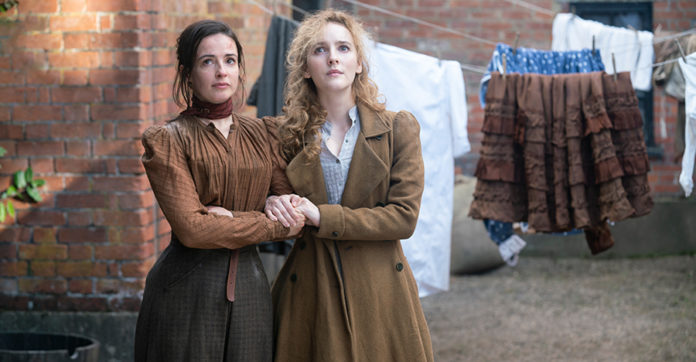 HBO drama series The Nevers premieres same time as the U.S. on Monday, 12 April at 9am exclusively on HBO GO and HBO, with a same day encore at 10pm on HBO. The first season is in two parts with the first six episodes of Part One airing every Monday at the same time while Part Two’s six episodes will follow at a later date.

August, 1896. Victorian London is rocked to its foundations by a supernatural event which gives certain people – mostly women – abnormal abilities, from the wondrous to the disturbing. But no matter their particular “turns,” all who belong to this new underclass are in grave danger. It falls to mysterious, quick-fisted widow Amalia True (Laura Donnelly) and brilliant young inventor Penance Adair (Ann Skelly) to protect and shelter these gifted “orphans.” To do so, they will have to face the brutal forces determined to annihilate their kind.

Rounding out this genre-bending drama’s acclaimed cast are:

With the city reeling from Maladie’s (Amy Manson) opera debut, Mundi (Ben Chaplin) takes a personal stake in tracking her down, while Amalia (Laura Donnelly) launches an investigation of her own. Meanwhile, the charitable Lavinia Bidlow (Olivia Williams) seeks to destigmatize the Touched at a society event, Hugo Swann (James Norton) enlists Lavinia’s younger brother Augie (Tom Riley) to help monetize his illicit enterprise, and a deranged doctor (Denis O’Hare) conducts a series of experiments.

Debut Date: Monday, 3 May at 9am on HBO GO and HBO

As the city buzzes with anticipation over a pending execution, Penance (Ann Skelly) grapples with a moral calling at odds with Amalia’s (Laura Donnelly) plan. With the two women at a crossroads, the Orphans must decide whom to follow.

Stream or download The Nevers on HBO GO. Download the app at App Store or Play Store and get a free trial. Access HBO GO at https://www.hbogoasia.com/. HBO GO is available on Android TV, Apple TV, LG TV and Samsung Smart TV – and comes with AirPlay and Google Cast functionality.