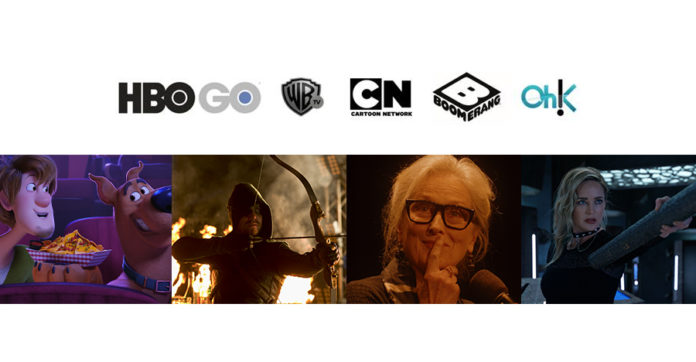 Premiering across WarnerMedia’s channels and app this May are movies and series starring leading ladies like Meryl Sterrp, Candice Bergen, Dianne Wiest, Uzo Aduba and Ruth Wilson, and manly men including Scott Eastwood, Dave Bautista, Olando Bloom and Andrew Scott, as well as lovable characters such as Scooby-Doo, Ben 10 and Grizzy and the Lemmings. There’s also more from the DC extended Universe this May including the brand-new season of DC’s Legends Of Tomorrow and all seasons of Arrow and Swamp Thing.

When the Going Gets Tough

This month, catch brand-new HBO and HBO Max Original premieres that take viewers on an emotional rollercoaster ride on HBO GO and HBO. Begin the journey with the HBO Max Original Film, Let Them All Talk, starring Meryl Streep which adopts a more personal look at the childhood friendships of novelist Alice Hughes and her two oldest friends while they are on a long voyage. The HBO Original Series In Treatment returns for a fourth season, where Uzo Aduba plays a therapist who has to delicately balance between empathy and professional detachment to help her patients navigate a wide range of issues.

His Dark Materials co-stars Ruth Wilson and Andrew Scott come together again in a new HBO Original Film, Oslo, which depicts the negotiations that resulted in the 1993 Oslo Peace Accords, while The Outpost features the harsh reality of soldiers involved at the frontlines of the Battle of Kamdesh, one of the bloodiest American engagements during the Afghan war. On a lighter note, My Spy shows that even hardened military men are not immune to the cute and spunky charms of a 9-year-old girl under his protection.

The unforgettable Scooby-Doo gets his first full-length animated adventure in Scoob!, revealing his origins and the greatest mystery faced by Mystery Inc, while alien-busting Ben meets a young Generator Rex on the run from a hostile Providence in the hour-long special Ben 10: Ben Gen 10 in his effort to save the world from being infected with alien DNA. Meanwhile, brand-new series Grizzy and the Lemmings premieres, kicking off an around-the-world adventure!

For those who prefer K-drama, Here’s My Plan is a tale of revenge and, hopefully, redemption. Catch it within 24-hours of Korea’s premiere on Oh!K.

DC’s Legends of Tomorrow returns with its sixth season, with familiar faces battling time-travelling threats while dealing with historical figures. Meanwhile, two DC fan favourites premiere on HBO GO for the first time. Binge watch all seasons of Arrow and Swamp Thing from 1 May.

For all these titles and more at your convenience, download the HBO GO app at App Store or Play Store and get a free trial to experience a vast selection of television series, movies – from action and adventure to comedies, documentaries and critically-acclaimed productions. Can’t decide what to watch? Just try the “I’m feeling random” feature to discover something new!