Box Office Boss
Home Animation Gods VS Humanity, Record of Ragnarok is out now on Netflix! 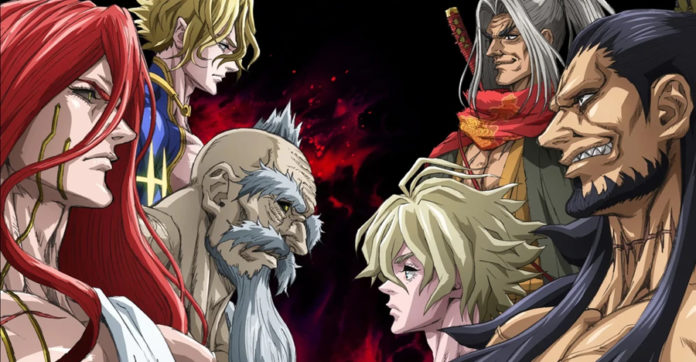 The much-anticipated adaptation of Record of Ragnarok has finally come and is available for streaming on Netflix. Shumaatsu no Valkyrie or Record of Ragnarok is a battle-manga that has been so hyped, it received its animated adaption after having only 40 or fewer chapters released.

Record of Ragnarok‘s plot is about Gods from different cultures deciding that they want to end the era of humanity. As the majority of the Gods voted for humanity’s destruction, a valkyrie named Brunhilde decided to intervene. As stated from the old texts, when the time has come for humanity’s end, they will be given a chance to defend themselves. They must prove themselves worthy by fighting the Gods. The Battle of Ragnarok, Humans vs Gods, going face to face on an arena, battling each other to the death. One human will go against a single God. Humans must win 7 matches or they will go extinct.

The plot of Record of Ragnarok is pretty straight forward but it is the characters that make this show/manga so great. Every one of them has a reason why they became so powerful and how some attained their godhood or ascension. The grueling fights, political stands, their reasons for fighting, all of these combined makes this franchise amazing. We would refrain from giving names of the characters cause we feel like knowing who’s going to be fighting itself is part of the excitement. Some compared the series to the Ufotable and Type-moon, the Fate franchise combined with Baki the Grappler or God of Highschool. It is that great.

Animated by Graphinica, responsible for titles such as Hellsing Ultimate, Hello World, and Expelled from Paradise. Records of Ragnarok or Shuumatsu no Valkyrie was created by Shinya Umemura and Takumi Fukui and illustrated by Ajichika. The initial release was from Comix Magazine on October 25, 2019, and is still an ongoing manga.

Record of Ragnarok is now available for streaming on Netflix and we recommend that you check it out.