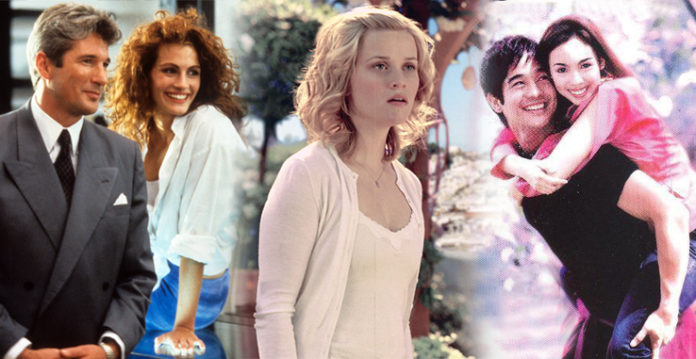 While there are a lot of new releases on Netflix, HBO, and other streaming services, there are also moments when we crave for those classics from the 90s or early 00s, back when life was simpler. These movies never get old, to be honest. Romance knows no time, so check out our list of throwback flicks and get ready to swoon!

The movie stars Meg Ryan (Kathleen Kelly) and Tom Hanks (Joe Fox) who play business rivals in the book industry and coincidentally—online chatmates. As conflicts rise in their business relationship, they are falling in love with each other virtually. Ryan’s and Hanks’ acting prowess are superb, endearing, and will definitely make you swoon. Add in humor and a stellar supporting cast, including Greg Kinnear, and you have yourself a winner!

Vivian Ward (Julia Roberts) is asked by business tycoon Edward Lewis (Richard Gere) to be his professional partner for six days in exchange for $3000. The experience turns out to be more than they expect. As they spend time with each other, they learn more about themselves and about life. The dialogue in the film is impeccable and the Julia Roberts’ post-makeover wardrobe is incredible and very timeless. This has been added to movie watch lists time and again and if you haven’t watch it by now, maybe it’s time you should!

3. While You Were Sleeping

Remember that time when you wished the stars would aline and your crush would become your fiancé? Well, that’s what happened to Lucy (Sandra Bullock)—sort of. This is such a heartwarming and funny watch that’s quite addicting to be honest. Seeing a young Sandra Bullock and Bill Pullman is a blast and they prove to be just as amazing as they are today. Aside from the romantic aspect, the movie touches heavily on family and the love that its members have for one another, which makes it a perfect Valentine’s Day watch, whether you’re watching by yourself, with your significant other, or by yourself.

As for teen rom coms, it doesn’t get any more classic than this. Based on Shakespear’s
Taming of the Shrew, the movie features Julia Stiles, Heath Ledger, and Joseph

Gordon-Levitt, who grew up to be some of Hollywood’s finest stars. We definitely miss Ledger, who left us too soon, and this movie definitely shows a fun side of him (amidst the roster of challenging roles that he played) that we like!

5. The Prince and Me

If you’re missing your college days or simply hanging out with your university pals, then this is the one to watch! Also starring Julia Stiles, the movie is one of the more underrated rom coms in our opinion. In the film she plays Paige Morgan, a serious pre- med student avoiding love because of fear that it might distract her from her dreams. Lo and beyond, she meets a prince posing as a student. Can you guess what will happen next?

Aside from You’ve Got Mail, Meg Ryan and Tom Hanks stared in two other movies, this being the other one. If you are familiar with Serendipity (2001), this has a similar vibe. It
has the signature charm of a Nora Ephron movie as well as some well-appreciated references to An Affair to Remember (1957). While it borders on fantasy, the flow of the movie, the old school music, as well as the dialogue makes it a great watch!

Speaking of fantasy, this one takes it up a couple of notches in that department. Reese
Witherspoon plays Elizabeth,  a doctor with no time for love. She meets David (played by Mark Ruffalo),  a widow having trouble moving on, in the most unconventional manner—as a spirit. Curious? You just have to watch it to find out.

Let’s move to the realm of Filipino rom coms.

There’s nothing quite like seeing Bea Alonzo and John Lloyd Cruz together on screen. This movie about love, friendship, and second chances has broken and mended hearts for years and we can’t really blame people for that. It really is a classic i.e. who does not know Popoy and Basha?

The formula for best friends turned lovers has been used over and over again, but we still eat it up like our favorite ice cream. In the movie Sharon Cuneta (Emy) and Aga Muhlach (Vince), has pretty much experienced everything together, except for being romantic partners. Despite using a formulaic premise, the chemistry of Sharon and Aga, as well as the good script, make it an engaging and touching watch.

It’s one of those Filipino films that nobody really forgets. Claudine Baretto (Toni) and Rico Yan (Lorenz) are polar opposites when it comes to their views on love. In exchange for date setups, she agrees to his request to for an exclusive photoshoot. The film makes the most of the “opposites attract” premise featuring Claud and Rico’s undeniable chemistry as well as a strong supporting cast including Cherry Pie Picache, Vhong Navarro, Nikko Valdez, and Dominic Ochoa.

We hope you enjoyed our countdown as much as we have! Have fun binging on these classics and share us your favorites! For more on rom coms and entertainment, visit us at: