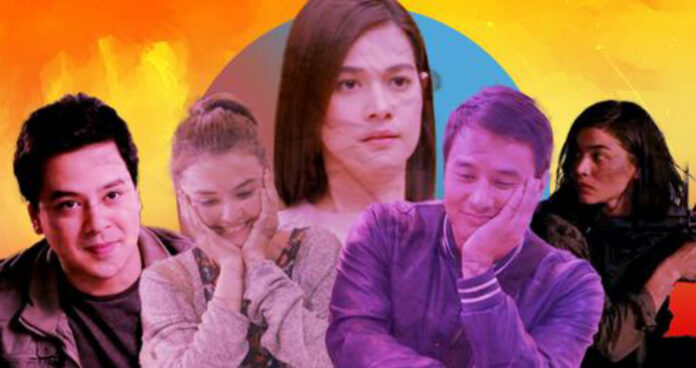 This November, we explore the world of Philippine Cinema and some of the most iconic and popular movies it has produced. Join us as we tackle favorites as well as award-winning pieces in the romantic, action, family, and horror scene. Here are 10 Pinoy Movies for your Binge Watch this November.

Where do broken hearts go? In this movie’s case, they go to Sagada to find healing and friendship. First in our list of Pinoy movies is That Thing Called Tadhana. The movie won Antoinette Jadaone Best Narrative Feature in the 2015 Guam International Film Festival.

This hugot film stars Angelica Panganiban and JM de Guzman, who’s characters are both healing from a broken heart. We love this movie for its rich conversations and thought provoking lines. If you’re in the mood for hugot, then this is the movie for you!

Watch it on Apple TV, Netflix

This movie is a reminder of how important family is despite the hectic lives that we live. After years of living separate lives, the Bonifacio siblings reunite once again to fulfill their father’s (Ronaldo Valdez) dying wish. During this time, the family faces unresolved issues and heartaches with each other. The movie features an all star cast— Allan (Aga Muhlach), Bryan (Dingdong Dantes), Cha (Cristine Reyes) and Dex (Enrique Gil)— in the dramedy that will touch your soul.

Anne Curtis is known for her versatility as an actress and indeed, in BUYBUST, she does not disappoint. The Pinoy movie follows the Philippine Drug Enforcement Agency (PDEA) who realize that their drug bust mission in the Manila Slums was poorly executed. The now trapped team must find a way to escape. Direk Eric Matti is known for his films on social issues and this one definitely makes you think about the country’s drug situation. Currently, it has an 83% score on  Rotten Tomatoes’  tomatometer.

In the mood for something “kilig” at “nakaka bagets”, what better love team to do that than KathNiel (Kathryne Bernardo and Daniel Padilla)? What makes this film great is though it still has the magic of the KathNiel tandem, it also explores a more mature side of film, tackling  issues like scandals, redemption, and new beginnings as well as the challenges OFWs face. Of course, it does not hurt that it is set in the beautiful city of Barcelona!

The film won Best Picture at the 2017 FAMAS Awards.

Speaking of tandems, another well-loved one is the pair of John Lloyd and Bea Alonzo. Dare we say that this pinoy movie started the renaissance of Filipino cinema targeted to the youth and young at heart, baking on the “hugot” that viewers can relate to. One More Chance tells the story of Basha (Alonzo) and Poppy (Lloyd) whose relationship was ended by an unhappy Basha because she needed to find herself again.

The film  is well-loved by “hugot aficionados”, among others. So much so that they did a second installment, A Second Chance, that got a whopping total box office of P556 million.  One More Chance, on the other hand,  won Movie of the Year at the 24th Star Awards for Movies by the Philippine Movie Press Club (PMPC). It has been digitally restored and remastered by ABS-CBN FIlm Restoration.

Let’s move to another Eric Matti piece, One the Job. Piolo Pascual is usually known for his rom-coms, but in this movie, he shows a different side to his acting. In the movie, viewers follow Pascual as one of the two law enforcers (Joey Marquez and Piolo Pascual) tasked with investigating a drug-related murder case connected to the prison gun-for-hire business. The movie also tells the story of two hit-man prisoners (Gerald Anderson and Joel Torre) who are temporarily freed to carry out political executions. We appreciate how daring the movie is in portraying crime and applaud it for its excellent direction and acting.

The film won for Jury’s Best at the 2013 Puchon International Fantastic Film Festival as well as a slew of Famas Awards, including Best Picture, Best Director and Best Screenplay.

Watch it on Apple TV

Incorporating Filipino culture to a horror film makes it so much scarier,  don’t you think? The film  centers on a cursed Bagua mirror that brings death to those who stare at it. The first installment stars Kris Aquino in her iconic role as Joy Ramirez, while the second one adds Coco Martin as Lester Anonuevo, the new owner of the mirror. As a bit of trivia, Feng Shui 1 grossed ₱114,236,563.00 and was the highest-grossing film of 2004 in the Philippines. On the other hand, Feng Shui 2 was the first Filipino movie to be rendered in 4D. It grossed P225 million.

The film, produced by Star Cinema in partnership with 108 Media in Singapore, stars Bea Alonzo as well as the one and only, Charo Santos-Concio— who is a master of understated acting that affects the viewer deeply. The story begins when a student of an all-girls Catholic school commits suicide, afterwhich, the school’s guidance counselor (Alonzo) attempts to solve the mystery of her death. In the movie, Santos-Concio plays Mother Alice, who is suspected by the students to be the cause of the death. The film ranked first in the 2019 Best Horror Movies by American magazine Harper’s Bazaar

Back in the world of rom-coms, Laida Magdalas (Sarah Geronimo) and Miggy Montenegro (John Lloyd), are trying to see if their relationship deserves another chance. This film is the 3rd one of a franchise starting with It Takes a Man and a Woman (2008), followed by You Changed My Life (2009). Considering that it took four years for the lovable tandem to come back for a third, you can imagine how excited fans were when it was released in 2013, so much so that it grossed ₱387 million in  the Philippines. The film’s magic is timeless, which is why we’re watching it again. And again. Watch and fall in love!

Watch it on Apple TV and Netflix

Paulo Avelino, Derek Ramsay, and Bea Alonzo. Just looking at the cast members makes you curious. The movie centers on the love triangle of the three, with Paulo as Cebu’s most eligible bachelor and mayoral candidate, Philip Cordero (Paulo) and Alonzo’s current love and Ramsey who plays her ex. The movie won Best Actor (Paulo Avelino), Best Actress (Bea Alonzo), and Best Supporting Actor at the GAWAD Pasado Awards 2019. One of the reasons the movie stands out? It’s ending. You’ll just have to watch it.

Indeed, Pinoy movies have so much potential and we’re rooting on seeing it grow even more! Have fun watching one or all in the list. Enjoy watching these 10 Pinoy Movies for your Binge Watch this November.  We’re excited to soon share our December list for Holiday watches. Got any suggestions? Share yours in the comment section.