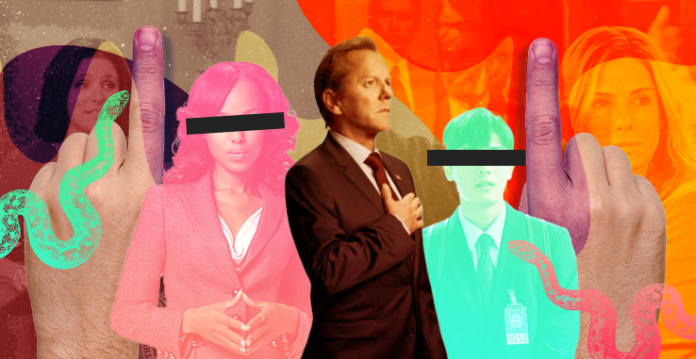 In lieu of the upcoming 2022 elections, here are The BOB 10 political watches that revolve around the lives of those trusted into the political area.

This 3-season thriller revolves around the new normal of Housing and Urban Development secretary, Tom Kirkman (played by Kiefer Sutherland). He is trust to being the head of state when a devastating attack claims the lives of the president and most of the US Cabinet members.  Little does he know about horrors that he would have to face with the new position he is in.

Looking for a good drama outside all those rom-coms? In this political KDrama, we are given a fictionally look at Korea’s National Assembly, where chief-of-staff, Jang Tae-jun (Lee Jung Jae) uses his power to influence decisions in relation to his own ambitions. The show also stars Shin Min Ah ( Kang Sun Young) a lawyer whose views oppose Tae-jun’s.

House of Cards tells the story Frank Underwood (Kevin Spacey), an ambitious and amoral politician with an equally ambitious wife. As it happens, Frank is passed over for appointment as Secretary of State but remains House Majority Whip. In his search for power,  he strategizes ways to attain power.

When a college professor and former CIA analyst steps into the political spotlight once again, she plunges into a world of intrigue, allies, and pressure, while also being a wife to a supportive husband and three children.

In this award-winning HBO political series, Meyer (played by Julia Louis-Dreyfus) and her team attempt to make their mark in the political arena but instead are consumed by day-to-day political games.

Olivia Pope (Kerry Washington) is no saint, with her affair with the married US president being one of her sins. As the current head of a crisis management firm though, she tries her best to fight for justice and see the truth in the events that unfold before her.

A group of marauders decides that the annual Purge (a day where all crime, including murder is decriminalized) does not stop at daybreak and instead should never end in The Forever Purge.
It goes the horror-thriller route and is written by series creator James DeMonaco, who also produced it with Jason Blum and Michael Bay

Purchase from  Google Play and YouTube. Also, available on HBO GO this coming May 7, 2022.

For action thrillers, it doesn’t get any more classic than  Harrison Ford films. In this movie, he plays the US president who encounters a terrorist attackk inside his presidential plane. Faking his escape, he hides inside the aircraft to protect his family and the rest of the passengers.

Sandra Bullock plays an American Political consultant who is hired to help in the re-election of the controversial president of Bolivia. In doing this, she must then compete with a long-term rival working for another candidate.

The series stars Viola Davis as Michelle Obama, Michelle Pfeiffer as Betty Ford, and Gillian Anderson as Eleanor Roosevelt, giving the viewers a  glimpse of American leadership through their eyes.

Watch it in Showtime

These political dramas and thrillers are surely stimulating and entertaining to watch and we know that you have your own list of favorites. Of course, things are different and way more serious  when real lives are involved. So, in the coming days let’s use our voice to aid in the search for good people to lead the nation we live in. Stay strong!