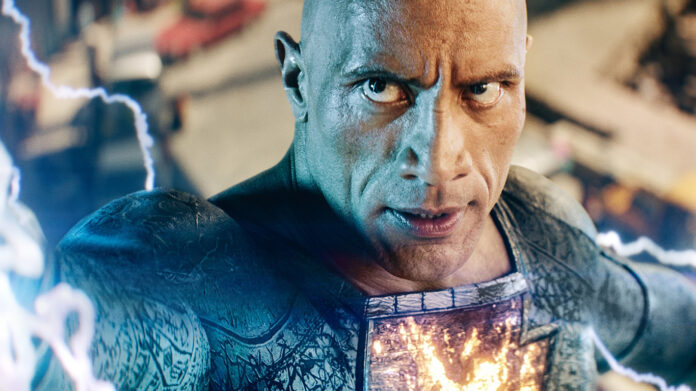 In “Black Adam,” global icon Dwayne Johnson stars in the title role as the DC universe’s fan-favorite antihero, bringing his compelling origin story to the big screen for the first time.

Johnson, who also produced the film via his Seven Bucks banner, has tackled roles in almost every genre, and stepping into a super suit was always something he considered.

“Black Adam actually came onto my radar when I was really young,” Johnson relates. “I loved comic books and I was always a DC kid. I gravitated towards Black Adam because he was one of the very few of the superheroes, supervillains, antiheroes—however you want to categorize him—who had brown skin and looked like me. Plus, he was always a badass,” he grins. And while the road to the big screen was long—more than ten years, in fact—Johnson’s connection to the character and his story remained strong. “Black Adam is something that has been a part of my DNA and my soul for many, many years.”

For the filmmakers, the goal was to tap into Black Adam’s legitimate comic book street cred and couple it with heart, a bit of dark humor and big cinematic action. For them, there was only one director who could capture it all in epic fashion, and he was already at the helm of one of their films.

The team turned to Johnson’s collaborator on “Jungle Cruise,” Jaume Collet-Serra, to direct “Black Adam.” Though new to the DC universe, he was intrigued by the reluctant hero with unparalleled super powers and an exacting viewpoint – he subsequently did a deep dive into the wealth of material in the canon, and also quickly honed in on the script’s timely themes. Remarks the director, “I’m attracted to characters that walk that fine line between doing the right thing and doing what needs to be done, and I immediately saw a character that was very similar to those who, when the system breaks down, are able to bring justice in ways that other people were not able to do. I felt like I hadn’t seen that in the superhero space and that to me was very exciting.”

Collet-Serra’s visions of Black Adam as the stranger rolling into town and becoming the principled rulebreaker, a staple of the western and lone cop genres, was an inspired game-changer for the producers, who felt his original take would satisfy both moviegoers and diehard comic book fans.

Observes Collet-Serra, “One of the more interesting parts of Black Adam is the thematic exploration about what makes a hero and who has the right to define what justice is. I wouldn’t call Black Adam’s moral code questionable, but perhaps his moral code is just not up to date with the times that we live in. He’s a no-nonsense guy; he does things his way for what he believes is right.”

For Johnson, everything in front of and behind the camera came together to create a version of Black Adam that was not only the role of a lifetime, but one that he felt would reverberate throughout the DC universe. “It’s rare to get the opportunity to introduce something completely brand new, from scratch, into the superhero mix and that’s what ‘Black Adam’ is. When I say, ‘The hierarchy of power in the DC Universe is about to change,’ it sounds audacious, but I mean that with real reverence and respect for the DC Universe. True fans know the qualities that Black Adam has been blessed with, powers that change the balance of power, and when you break down these qualities and these powers that Black Adam has, you realize it’s rooted in truth.”

In Philippine cinemas October 19, “Black Adam” is distributed worldwide by Warner Bros. Pictures.  Join the conversation online and use the hashtag #BlackAdam