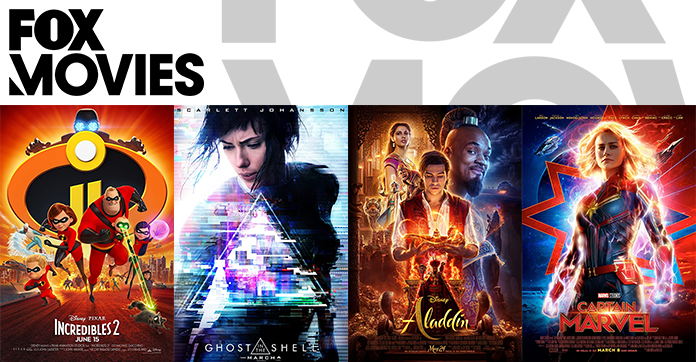 We all know you miss going outside for movies but for the safety of our nation and the world, we do suggest staying inside as much as possible. In the meantime, here are more movies to watch on FoxMovies coming this April to pass the time during this quarantine.

Ghost in the Shell

In a distant future, the first cyber-human soldier was created, Her name was Major. Created to fight the growing cyber-terrorism, she discovered secrets about her past and her identity. Now she sets out to find out the truth.

A cyberpunk science fiction movie, Ghost in a Shell featuring Scarlett Johansson is a live recreation of the animated series with the same title. A high action futuristic drama sci-fi with mysteries to be solved by our protagonist the Major.

Showing on FoxMovies on the following dates:

Elastigirl, the wife of Mr.Incredible is now tasked to bring the faith of the people in superheroes back. While she’s dealing with the supervillains, someone has to take care of the kids which are quite proven to be difficult to handle, even for Mr.Incredible.

The long-awaited sequel for the hit of 2004 The Incredibles, The Incredibles 2 focuses on the role that most fathers wouldn’t be facing and that is staying at home with the kids.
Breaking the traditional roles, It shows that being a housewife or in this case, househusband is not an easy job, especially if your kids have quirky superpowers.
It’s fun seeing the family again and specially Jack-Jack who seems to get more screen time than ever in this film and surely enough we bet that you’d have a great time watching this together with your family.

The Chronicles of Narnia: The Lion The Witch and The Wardrobe

A bunch of siblings found themselves on a strange new land when Lucy found a path from a dusty wardrobe. They didn’t know that it was fate that lead them to the place and now they must join Aslan on a mission to defeat an evil queen.

Based on the masterpiece of C.S. Lewis, The Chronicles of Narnia is an outstanding fantasy movie filled with adventures and mystical creatures on a land filled with magic. A recreation from the 1988 Film with the title “The Lion, The Witch & The Wardrobe.” surely it is a beloved title of various generations.

Nicole, an investigative reporter who has been arrested for assaulting a police officer didn’t go to the court for her bail, and as such a bail enforcement agent a.k.a. a bounty hunter was sent to get her. Mr. Milo Boyd, her ex-husband was sent to arrest her and it doesn’t really go well when the one you’re trying to arrest is a former lover.

Nicole is not only being hunted by the corrupt cop she’s been investigating but also a lovestruck coworker, while Milo is being hunted by thugs sent to collect his gambling debts.
The two found themselves working together even with their past bad relationship.

Bird Fitcher, a high schooler finds a vintage polaroid camera and soon finds out its horrible secret. Anyone captured with it is bound to die from the hands of a mysterious creature that is also in the photo. They must now find a way to undo what is done or it’ll be over for them.

A Drama, Horror, Mystery film, Polaroid is a movie that will remind you of Final Destination. A group of people trying to evade the inevitable and looking for ways to survive. A reminder of the stories behind antiques.

RISE OF THE GUARDIANS

When the world is filled with fear, Pitch or The Boogeyman becomes a powerful menace. He plans to attack Earth to inflict more fear and increase his power and it is up to the Immortal Guardians, Santa Claus, Sandman, The Easter Bunny, and the Tooth Fairy to protect the children. But they wouldn’t be able to do it with just them, they will need the help of a new Guardian, Jack Frost.

Based on the book “Guardians of Childhood” of William Joyce, Rise of the Guardians is a great movie about bravery, hope and the power of belief.
It’s cool to see all these childhood tales come to life interacting with each other together with their new ally, Jack Frost. A light-hearted story that your kids will definitely love.

A poor citizen, Aladdin goes by day to day by stealing food from merchants but one day he met a princess. Princess Jasmine, the daughter of the sultan of Agrabah. Being a poor citizen he’s thinking there is no way that the princess will ever notice him. So he took on a very dangerous job to make himself rich and finding a magic lamp with a genie trapped in it that could grant him 3 wishes. He then used this to make himself a prince yet it will take a lot more to capture princess Jasmine’s heart that just riches.

Aladdin is a live-action reboot of the classic Disney animated series of the same title. Based on a tale in the book One Thousand and One Nights. Aladdin is a magical film teaching us that it doesn’t take all the money in the world to be happy or to impress someone. A story of believing in oneself and hope. Nostalgic and very lively with its musical scores, Aladdin will surely take you back to your younger days.

Jean Grey, one of the many X-men and perhaps the most powerful psychic in the universe managed to avert the world from devastation by absorbing the power of a solar flare. With her own powers alone she’s been struggling to control it and this additional power isn’t helping her case. The D’bari, an alien race whose goal is to obtain that power wanted to help Jean until the X-men found out their plan to destroy humanity.

X-Men’s rich characters is bound to have an origin or a solo movie of its own and this one’s about Jean Grey. Her struggles to fight off the immense power she posses and how she hates that she keeps hurting his family and friends. A movie not only about self-control but also an appreciation of the people that support you.

PRINCE OF PERSIA: THE SANDS OF TIME

A prince who has invaded a land managed to get his hands on a special dagger that can reverse time. The princess warned him of the danger that it posses and it must be contained before it got in the wrong hands.

From the creators of Pirates of the Caribbean. A fantastic movie based on the game Prince of Persia, The movie is an action fantasy romance made by Disney. It is Rated-PG however for it involves Hassansins, a deadly group of assassins who are interested in the power of the dagger. Prince Dastan and Princess Tamina must now embark on a journey, fleeing against the army of the Hassansins.

Vers is a soldier of an alien race however due to an accident she found herself in a very familiar land yet so distant. She was found roaming around by a young Nick Fury and they discovered that she is from Earth. Remembering her memories she is now on the quest to find out who the real enemy is.

A Marvel superhero movie, Captain Marvel is one of the many superheroes in the genre and perhaps one of the strongest. This movie tackles her origins and the source of her power. Great movie with a bit of nostalgia from the early ’90s.

Engineer, Billionaire, Playboy, Philanthropist, Tony Stark is the head of Stark Industries. A company that makes weapons of war. He finds himself captive by a terrorist group in Afgan when he was investigating who is selling them their weapons. Locked in captivity, he was forced to work and make weapons for the terrorist group until he engineered a machine that could let him out of the place.

It’s been 12 years since the rise of the superhero genre and this is what started it all. The first Iron man movie from Paramount Pictures. We’ve been on this long journey following our superheroes and we might have said goodbye to the majority of them from the last Avengers: Endgame movie. But it’s never too late to pay some respect to the star of the show. Iron man is the origin story of Tony Stark and we could see how his behavior changed from these past 12 years.