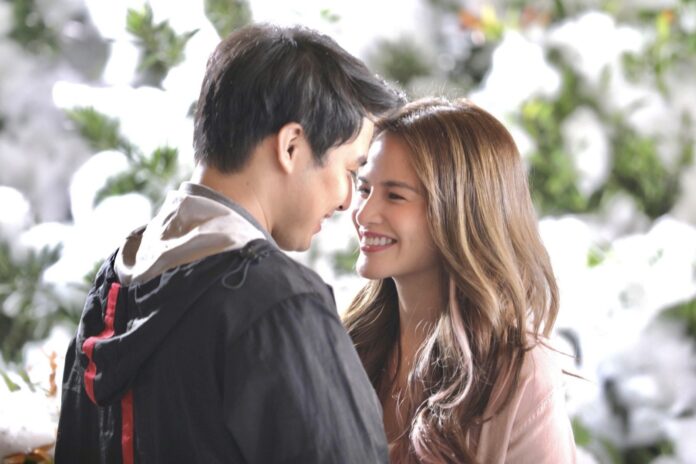 A girl who is in a constant battle for her life is asking a boy to fight for their love. If only he was not too consumed by his own battles.

Real life couple McCoy de Leon and Elisse Joson are sure to touch hearts in “Habangbuhay”, a Vivamax original movie streaming on April 20, 2022 on Vivamax Plus and April 22, 2022 on Vivamax.

Elisse Joson plays Bea. Diagnosed with Common Variable Immune Deficiency (CVID), her body has low levels of protective antibodies, thus making her highly susceptible to various infections. Because of this, Bea does not have the luxury to go places. Her over protective mother Lily (Yayo Aguila) just wants to keep her safe at home.

In spite of this, Bea maintains a cheerful disposition. She enjoys being in her own world filled with music, dreams, and imagination. She does live streaming to interact with other people. So, all things considered, Bea is doing good. And with JR around, she’s feeling even better.

McCoy de Leon is JR, the family’s houseboy. Years ago, Bea’s nanny took him home after finding him roaming the streets in tears. JR grew up taking life too seriously, even calling himself a “sad boy”. But as he learns to loosen up, Bea greatly enjoys his company. She’s proud to say that he’s the one who truly makes her feel alive.

But suddenly, this man whom Bea considers her “safe space” seems to be creating a gap between them. What will become of his promise that they’ll be together for a lifetime?

This is McCoy and Elisse’s first movie together since 2019 when they starred in “Sakaling Maging Tayo”. Since last year, McCoy has been visible on Vivamax because of the comedy series, “Puto”, and the musical film “Yorme – The Isko Moreno Domagoso Story”.

It was also in the latter part of 2021 that McCoy and Elisse revealed that they already have a baby daughter. The news was received positively and fans made #McLisse a trending topic.

Subscribe to Vivamax and feel the power of the McLisse chemistry in “Habangbuhay”.

Go to web.vivamax.net or download the app and subscribe via Google Play Store, App Store, or Huawei App Gallery.
Watch all you can on Vivamax for only P149/month and P399 for 3 months for bigger savings. A 3-day access to Vivamax at a hot price of P29 is also available. And for only P499, you can get the new VIVAMAX PLUS. This special feature gives you a chance to stream your chosen movie one week in advance from its regular playdate!
For payment thru website, you may choose from EC Pay, 7 Eleven, All Day, All Day, Pay Mongo, GrabPay, GCash, or PayMaya. For payment thru app, you may choose from Globe, Smart, GCash, Paypal, Visa, or Mastercard. For payment thru Ecommerce, you may choose from Lazada, Shopee, Comworks, Clickstore, or Paymaya. For payment thru authorized outlets, you may choose from Load Manna, Comworks, Cebuana Lhuillier, Palawan Express, and Load Central. VivaMax’s cable partners are SkyCable, Cable Link, Wesfardell Connect, Fiber, BCTVI, Cebu Cable, Zenergy HD, Cotabato Cable Television Network Corporation, and Concepcion Pay TV Network, Inc.
In UAE, Saudi Arabia, Kuwait, Oman, Bahrain, and Qatar, Vivamax can be accessed for only AED35/month.
In Europe, Vivamax can be enjoyed for only 8 GBP/month.
Vivamax is also available in Hong Kong, Japan, Malaysia, and Singapore, Indonesia, Thailand, South Korea, Taiwan, Brunei, Macao, Vietnam, Maldives, Australia, New Zealand, USA and Canada.
Indeed, Vivamax is not stopping to entertain more people across the globe!
Vivamax, atin ‘to!