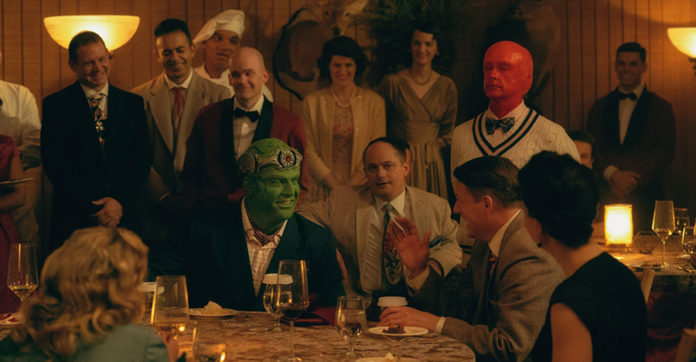 DC’s strangest group of heroes will be back to save the world again when the Emmy® nominated series Doom Patrol returns for its third season. The first three episodes of Season 3 will debut same time as the U.S. exclusively on HBO GO from Thursday, September 23 while each subsequent episode premieres every Thursday.

Doom Patrol reimagines one of DC’s most beloved groups of Super Heroes: Robotman aka Cliff Steele (Brendan Fraser), Negative Man aka Larry Trainor (Matt Bomer), Elasti-Woman aka Rita Farr (April Bowlby), Crazy Jane (Diane Guerrero) and Cyborg aka Victor Stone (Joivan Wade), all led by modern-day mad scientist Niles Caulder aka The Chief (Timothy Dalton). Each member of the Doom Patrol suffered a horrible accident that gave them superhuman abilities, but also left them scarred and disfigured. Part support group, part Super Hero team, the Doom Patrol is a band of superpowered freaks who fight for a world that wants nothing to do with them.

Season three opens on the culmination of Dorothy’s (Abi Monterey) confrontation with the Candlemaker that leads to a devastating loss. The Doom Patrol is at a difficult crossroads and each member struggles to face who they are and who they want to be. And things get a whole lot more complicated when Madame Rouge (Michelle Gomez) arrives in a time machine with a very specific mission, if only she could remember it.

Catch up on the earlier two seasons of Doom Patrol by streaming or downloading all episodes on HBO GO.

In Season 1, following the mysterious disappearance of The Chief, these reluctant heroes find themselves in a place they never expected to be and are called to action by Vic Stone aka Cyborg, who proposes a mission that is hard to refuse. Season 1 also stars Alan Tudyk (“Powerless”, “Rogue One: A Star Wars Story Suburgatory”) as Mr. Nobody.

In Season 2, following the defeat of Mr. Nobody, the Doom Patrol now find themselves mini-sized and stranded on Cliff’s toy race car track. Here they begin to deal with their feelings of betrayal with Niles Caulder aka The Chief, while confronting their own personal baggage. As each member faces the challenge of growing beyond their own past traumatic experiences, they must come together to embrace and protect the newest member of the family, Dorothy Spinner (recurring guest star Abigail Shapiro), Caulder’s daughter, whose powers remain a mysterious but real threat to bringing on the end of the world.

Doom Patrol is produced by Berlanti Productions in association with Warner Bros. Television with Jeremy Carver, Geoff Johns, Greg Berlanti, Sarah Schechter, Chris Dingess and Tamara Becher-Wilkinson serving as executive producers. The series is based on characters created for DC by Arnold

Download the app at the App Store or Play Store on your device. HBO GO can be accessed via Android TV, Apple TV, LG TV and Samsung Smart TV – and comes with AirPlay and Google Cast functionality.

You can also access HBO GO via Cignal, Globe and Skycable or at https://www.hbogoasia.ph/.