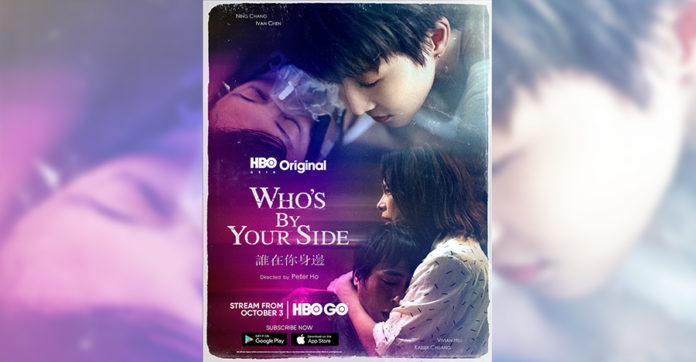 Kaiser Chuang, Vivian Hsu Ning Chang and Ivan Chen in Who’s By Your Side.

Fans of Chinese dramas can stream the HBO Asia original series – Who’s By Your Side 《誰在你身邊》 – exclusively on HBO GO from Sunday, October 3 at 9pm. Simultaneously available on the HBO channel, the Taiwanese series premieres with two episodes followed by a new episode every Sunday.

Directed by Golden Bell-winning director Peter Ho (何潤東), Who’s By Your Side stars Kaiser Chuang (莊凱勛) as Zhi-Sheng, a low-esteemed and debt-ridden car mechanic, and Vivian Hsu (徐若瑄) as Yong-Jie, his kind and optimistic wife who holds two jobs to make ends meet while helping to pay off his debts. When Zhi-Sheng makes baseless claims about his wife’s infidelity, it surprises Yong-Jie’s step-sister Yong-Qi, played by Ning Chang (張鈞甯), and arouses her long-repressed insecurities about her own supposedly perfect marriage to Hao-Yuan, played by Ivan Chen (陳恩峰), who comes from a wealthy and respected family. The 10-episode, one-hour series explores relationship issues and marital challenges, and depicts painful dilemmas for the characters through a unique lens on their daily lives.

To date, WarnerMedia has produced and aired more than 30 HBO Asia Original productions with many more in the pipeline. Audiences can stream a range of Asian series, movies and documentaries on HBO GO, including Trinity of Shadows starring Kaiser Chuang and Dream Raider starring Vivian Hsu and Ellen Wu. Download the HBO GO app now at the App Store or Play Store or access HBO GO at http://www.hbogoasia.sg/. HBO GO is available on Android TV, Apple TV, LG TV and Samsung Smart TV – and comes with AirPlay and Google Cast functionality.