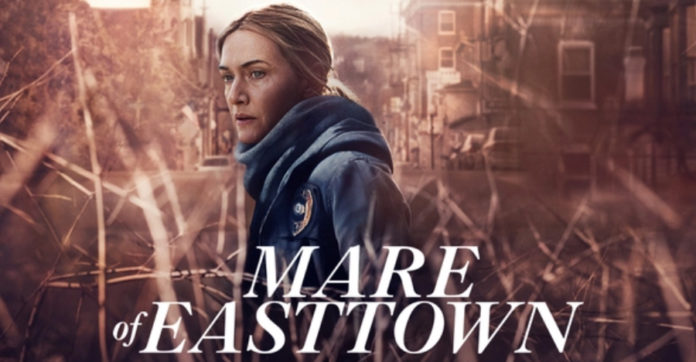 Starring Academy Award®, Emmy® and Golden Globe®-winner Kate Winslet (HBO’s “Mildred Pierce”), from creator and writer Brad Ingelsby (“The Way Back”), with all episodes directed by Craig Zobel (HBO’s “The Leftovers”), the seven-part limited series Mare Of Easttown debuts same time as the U.S. on Monday, 19 April at 10am exclusively on HBO GO and HBO, with a same day encore at 11pm on HBO.

Ingelsby returned to his home state of Pennsylvania to write the series, an exploration into the dark side of a close community and an authentic examination of how family and past tragedies can define our present. Winslet stars as Mare Sheehan, a small-town Pennsylvania detective who investigates a local murder as life crumbles around her.

Mare (Kate Winslet) visits a grisly murder scene before informing the victim’s enraged father. As a video from the night of the crime surfaces, Mare questions suspects in the case and gives an icy welcome to County Detective Colin Zabel (Evan Peters), who’s been called in to assist. Later, Mare bumps heads with locals and airs concerns about her grandson Drew (Izzy King) in light of her late son’s mental health struggles. Written by Brad Ingelsby; Directed by Craig Zobel.

As Mare (Kate Winslet) and Colin (Evan Peters) parse new physical evidence, phone records lead to an unlikely suspect. After lashing out at Helen (Jean Smart) about a possible custody fight over Drew (Izzy King), Mare receives some unprompted advice from Richard (Guy Pearce) on how to move forward with Carrie (Sosie Bacon). Later, Kenny (Patrick Murney) and Mare face the consequences of their misguided attempts to protect their families. Written by Brad Ingelsby; Directed by Craig Zobel.

With Mare (Kate Winslet) forced to take a backseat on the case, Colin (Evan Peters) presses a local priest about the vague circumstances that prompted his transfer to the parish. Meanwhile, an anonymous call gives Dawn (Enid Graham) hope that Katie might still be alive. Written by Brad Ingelsby; Directed by Craig Zobel.

In her mandated therapy, Mare (Kate Winslet) opens up about her family’s history with mental health struggles. Meanwhile, Lori (Julianne Nicholson) tries to get to the bottom of her son’s outburst at school, and later, Mare meets with a semi-retired source to help find a possible connection to her three cases. Written by Brad Ingelsby; Directed by Craig Zobel.

Stream or download Mare Of Easttown on HBO GO. Download the app at App Store or Play Store and get a free trial. Access HBO GO at https://www.hbogoasia.com/. HBO GO is available on Android TV, Apple TV, LG TV and Samsung Smart TV – and comes with AirPlay and Google Cast functionality.