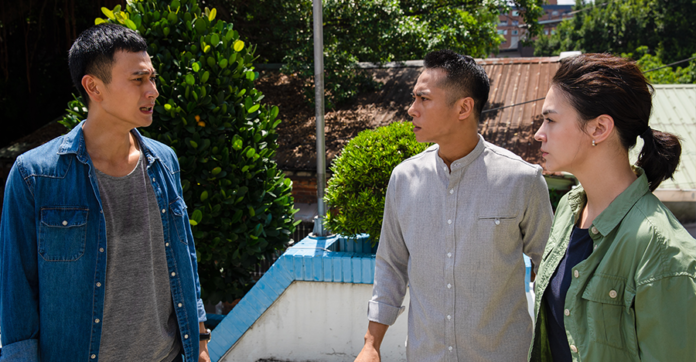 Liu Kuan-Ting as Chia-Hao, Kaiser Chuang as Chi-Hsiao and Sandrine Pinna as Tze-Wei in the Trinity of Shadows

Premiering with two back-to-back episodes every Sunday at 9pm from June 13 on HBO GO and HBO, brand-new HBO Asia Original Taiwan series, Trinity Of Shadows《第三佈局: 塵沙惑》, follows a murder investigation that leads righteous detective Tze-Wei, an up-and-coming public official Chi-Hsiao, and rookie policeman Chia-Hao into a dark labyrinth of power play. As the trio close in on the truth, they are inextricably intertwined and forced to confront their demons linked to a cold case from three years ago.

Detective Tze-Wei is handling an assault case. When the police arrive at the scene, the victim, Nicole, decides not to press charges against the perpetrator, stunning Tze-Wei.

Ordered to do administrative work, Tze-Wei receives an unexpected call for backup from a rookie police officer, Chia-Hao, who is investigating the case of absconded migrant workers. Disregarding protocol, Tze-Wei rushes to Chia-Hao’s aid.

City Councilor Yang Chi-Hsiao is shot in his electoral district. Tze-Wei rushes to the scene immediately and makes an unexpected discovery.

Tze-Wei reluctantly takes on the task to safeguard Chi-Hsiao and identifies the shooter as a wanted criminal who held him hostage three years ago. Meanwhile, Nicole’s neighbour, Ching-Yao, discovers a body while hosting his friends from Hong Kong.

The body is identified as Jia-Jia, a young woman linked to Chi-Hsiao, whose cause of death is almost identical to another victim. While Tze-Wei and Chia-Hao suspect a police cover-up, Chi-Hsiao is already one step ahead of them.

Tze-Wei and Chia-Hao decide to work with Chi-Hsiao to secretly investigate Ming-Chieh. When the duo finally arrest him, he is released due to a lack of evidence, infuriating Chia-Hao, whose grudge against Ming-Chieh is driven by personal reasons.

Tze-Wei and Chi-Hsiao continue to investigate Jia-Jia’s murder. They receive a critical tip by chance. Meanwhile, Chia-Hao continues to look into Ming-Chieh on his own.

Episode 8: The Truth of Mystery 《霧裡的真相》

Tze-Wei believes that Chia-Hao’s disappearance is connected to Ming-Chieh’s kidnapping. Acting ahead of the other police officers, Tze-Wei tries to get ahold of Chia-Hao but to no avail.

Download or stream Trinity of Shadows on HBO GO. Download the app at App Store or Play Store and get a free trial. Access HBO GO at https://www.hbogoasia.com/. HBO GO is available on Android TV, Apple TV, LG TV and Samsung Smart TV – and comes with AirPlay and Google Cast functionality.