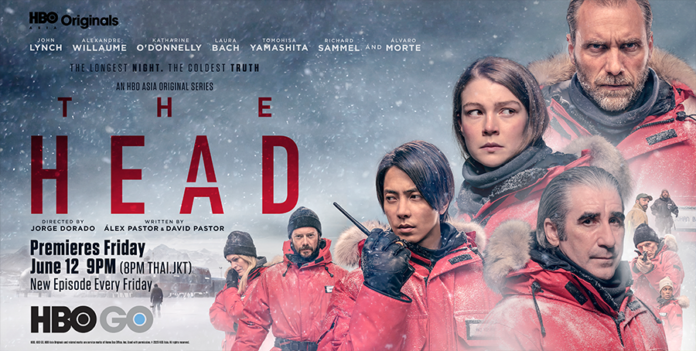 SINGAPORE, 23 APRIL 2020 – WarnerMedia Entertainment Networks today announced the premiere date and released the trailer of the brand-new HBO Asia Original, The Head, produced in association with Hulu Japan and THE MEDIAPRO STUDIO. The series will premiere on 12 June at 9pm on HBO GO and HBO.

The Head is a survival thriller set in the Polaris VI international polar station in Antarctica during its long, dark Antarctic months, engulfed by the cold, the wind and the vast expanses of ice. A select group of scientists from different countries are in charge of maintaining the base operational during the long polar nights. But in the midst of winter, the station suddenly stops communicating with the outside world. With dialogues in English and Danish, the suspenseful storyline develops over six hour-long episodes and is directed by Jorge Dorado (“The Pier”, “Mindscape”).

The series was shot in a two-thousand-square-meter studio in Tenerife, Spain, where the purpose-built set of the Polaris VI research station where most of the action takes place was erected, reproduced to actual scale, based on information about the layout and operation of this type of scientific facility, which enabled the show-runners to film long shots of the characters wandering around inside the station with complete authenticity. The production crew also travelled to the rugged landscapes of Iceland to shoot the series’ exteriors, although most of the story is set inside the polar station, which provides a particular feel of encapsulation.

The Head was presented in a forum session at Series Mania in 2017, a prestigious international festival in France, and garnered enormous interest among representatives from the media and entertainment industry.

Winter has fallen on the South Pole. The sun will soon disappear for the next six months. A small team of scientists, known as the Winterers, will remain at the Polaris VI Antarctic Research Station to continue their innovative research. Their work is crucial in the fight against climate change and they are under the command of renowned biologist Arthur Wilde (John Lynch). But when spring comes, summer commander Johan Berg (Alexander Willaume) returns to the station only to find most of the team dead or missing. A killer is on the loose and Annika (Laura Bach), Johan’s wife, is missing too. If he wants to find her alive, he will have to trust Maggie (Katherine O’Donnelly), the young doctor who is profoundly shaken and apparently the sole survivor from the group… or, is there someone else who survived?