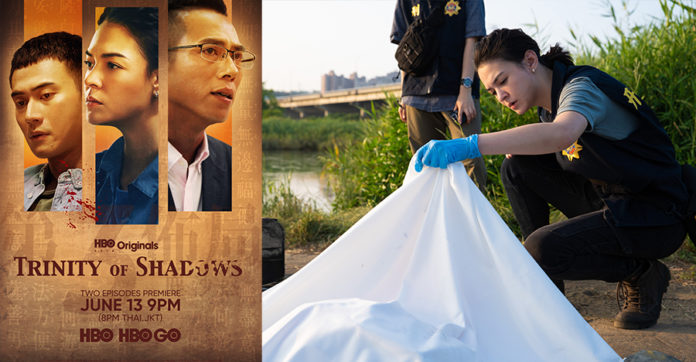 WarnerMedia and CATCHPLAY today announced a brand-new HBO Asia Original Taiwan series, Trinity of Shadows《第三佈局 塵沙惑》. The 15-part, hour-long crime drama series will premiere with two back-to-back episodes every Sunday at 9pm from 13 June on HBO GO and HBO in Asia. In Taiwan, the series will also simulcast on the CATCHPLAY+ streaming service. The series is co-presented by WarnerMedia, CATCHPLAY and HKTVE.

An award-winning trio of Taiwanese actors Kaiser Chuang 《莊凱勛》, Sandrine Pinna 《張榕容》 and Kuan-Ting Liu 《劉冠廷》 lead the cast of this noir crime drama. In fact, all three are familiar names at Taiwan’s Golden Bell and Golden Horse awards, as well as on the film festival circuit. The series also introduces a young talent, Stanley Yau 《邱士縉》, a member of MIRROR – the latest pop sensation from Hong Kong.

The series is about a murder investigation which has similarities to a cold case from three years ago. During the investigation, the lead detective (Pinna), an up-and-coming public official (Chuang) and rookie policeman (Liu) are drawn together into a dark labyrinth of power play.

Trinity of Shadows is produced by David Tang 《唐在揚》 (Dad’s Suit, The Long Goodbye and Who Killed Cock Robin?) and directed by Bo-Hao Hong 《洪柏豪》 (Dad’s Suit, Wake Up S2). The screenwriter is Chien-Ming Huang 《黃建銘》 (Scoundrels, Wake Up).

WarnerMedia and CATCHPLAY previously co-presented the Golden Bell winning series THE WORLD BETWEEN US《我們與惡的距離》 in 2019. Stream or download all episodes of the THE WORLD BETWEEN US, is a ten-part hour-long series that follows the aftermath of a mass-shooting where all parties involved – the killer, the victims, the victims’ families, the media and the defense teams, whose fates are all intertwined, on HBO GO.