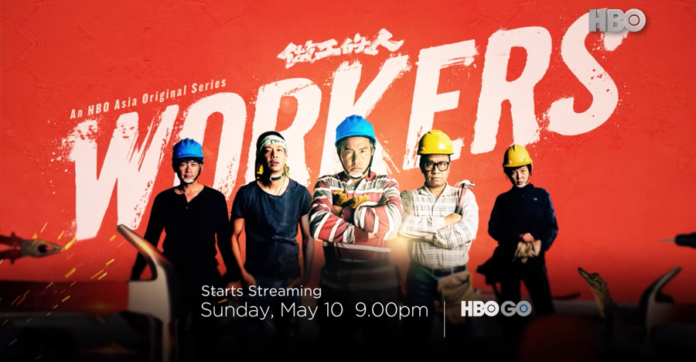 From The Award-Winning Team Behind The World Between Us And Starring Golden Bell Award Winner Christopher Lee, The Series Will Premiere On HBO GO On 10 May

SINGAPORE, 14 APRIL 2020 – By the team behind the six Golden Bell Awards winning series, The World Between Us《我們與惡的距離》, comes a brand-new HBO Asia Original drama series Workers《做工的人》. The series is based on a best-selling novel of the same name and stars Golden Bell-winning actor Christopher Lee 《李銘順》 and Alex Ko 《柯叔元》. Workers premieres on HBO GO on 10 May at 9pm with two back-to-back episodes followed by one new episode at the same time weekly.

The six-episode hour-long series in the Chinese language follows a group of construction workers, who daydream about being rich. They resort to countless outrageous get-rich-quick schemes only to make fools out of themselves. Despite these setbacks, the happy-go-lucky workers continue to be optimistic. Nothing will stop their pursuit of being rich beyond their wildest dreams!

“With 20 HBO Asia Original productions to date, WarnerMedia is ramping up its investment in distinctive locally relevant content this year,” said Clement Schwebig, Managing Director of WarnerMedia Entertainment Networks, Southeast Asia, Pacific and China, which operates HBO in Asia. “Our past Taiwanese original productions, from The Teenage Psychic to The World Between Us, has not only scored critical acclaim internationally but also won the hearts of fans across the region and beyond. Fans can look forward to more HBO Asia Originals premiering this year including more Taiwanese productions starting with Workers.”

Workers is an HBO Asia Original series produced in association with Kbro Media, as well as HIM International Music and produced by DaMou Entertainment, the studio behind the acclaimed HBO Asia Original series The World Between Us. Workers is directed by Cheng Fen-Fen 《鄭芬芬》 (“Go Brother!”), produced by Golden Bell-winning producer Lin Yu-Ling 《林昱伶》 (“The World Between Us”), and written by Hong Zi-Ying 《洪茲盈》 (“On Children”) and Cheng Fen-Fen 《鄭芬芬》.