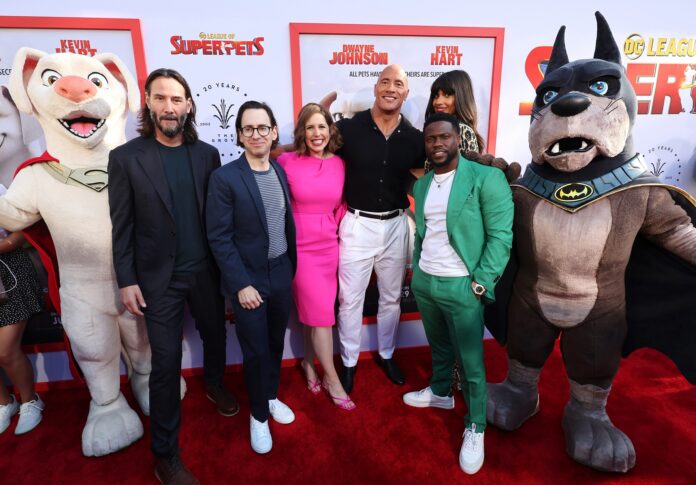 Uniting the unsung heroes of the DC canon, Krypto and Ace, “DC League of Super-Pets” is a funny and fun-filled, action-packed adventure that boasts a terrific combination of two of everyone’s favorite things: pets and DC Super Heroes!

In “DC League of Super-Pets,” Krypto the Super-Dog and Superman are inseparable best friends, sharing the same superpowers and fighting crime in Metropolis side by side. When Superman and the rest of the Justice League are kidnapped, Krypto must convince a rag-tag shelter pack—Ace the hound, PB the potbellied pig, Merton the turtle and Chip the squirrel—to master their own newfound powers and help him rescue the Super Heroes.

In addition to bringing together some of the DC Universe’s biggest names, the film boasts a huge casting coup as well, with the one and only Dwayne Johnson as Krypto, together again with Kevin Hart as Ace—no dynamic duo plays off each other better and who but Johnson and Hart banter with such a biting wit?

Johnson, who also serves as a producer on the film under his Seven Bucks banner, observes, “When you think about the conceit of what this is, about the pets of these Super Heroes, and the fact it has never been done before in cinema history!?  That is pretty remarkable, considering the genre of superheroes films as a whole.  What kind of pets would your favorite DC Super-Heroes have, from Superman to Wonder Woman to Batman to Flash to Green Lantern?  So, when I first heard the idea, I was in without hesitation, 100%.  And when you think about the players—from Warner Bros. to DC, and the love that we at [our production company] Seven Bucks Productions have for the superhero genre and for animation as well—we jumped at the partnership and the opportunity.”

Hart’s Ace is the de facto leader of the shelter pack.  The actor was drawn to the story right away, noting, “It’s a big movie with big characters.  I feel like there are so many moments throughout the script where the verbiage on the page popped, and they put the right people into those positions and the material just blows you away—they did a great job casting.  That’s what you want on a movie like this—to be part of an amazing ensemble that feels special.  You really feel, ‘Hey, we got something here.’”

For the film’s two-legged heroes, John Krasinski voices Krypto’s bestie and Metropolis’s own Clark Kent, aka Superman, and Olivia Wilde is the voice of his sweetheart, Daily Planet reporter Lois Lane.  The Justice League members seen and heard in the film are Batman, voiced by Keanu Reeves; Wonder Woman, by Jameela Jamil; Aquaman, by Jemaine Clement; The Flash by John Early; Green Lantern by Dascha Polanco; and Cyborg by Daveed Diggs.

“In an animated movie, the most important thing is that the actor’s voice is the perfect voice for the character, but we got lucky that they also happened to be huge movie stars,” director Jared Stern smiles.

Amidst all the high-flying action and adventure, the film also touches on the importance of friendship and family—and emphasizes that anyone’s real superpower, no matter how many legs you stand on, is being true to yourself.

“DC League of Super-Pets” will be released by Warner Bros. Pictures in Philippine theaters July 27.  Join the conversation online and use the hashtag #DCSuperPets